Gov. Cuomo: Get Money out of Politics in NY 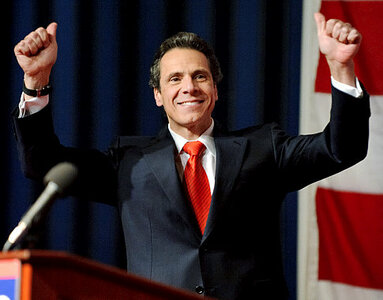 We write as New York people of faith and clergy to strongly encourage your continued active leadership in transforming New York state’s broken campaign finance system into a national model in the post-Citizens United era.

We believe dramatic change is needed so that our proud democracy lives up to the values of being “of, by, and for the people.”

As faith leaders, we stand for honoring the voices of each person created in God’s image and for protecting the integrity of those voices in our democratic process. Together, we have worked to sound the alarm over a flood of special interest money into our political system from a privileged few and call upon our leaders to pursue bold solutions to this crisis of democracy.

Candidates are spending so much time courting donors that they have less and less time to speak with voters or craft solutions to our biggest problems. Voters, especially younger Americans, tune out because they view our elections as un-democratic and potentially corrupt.

The rich and the poor grow further and further apart, a trend reinforced by a path to electoral victory studded with high-dollar fundraisers and special interest backroom deals. Attack ads blanket the airwaves, dividing us when we need to come together to solve our country’s enormous challenges.

New York’s national prominence ensures that a strong message will be sent to Washington, D.C., that real, serious change is possible, especially now as we have just witnessed, from coast to coast, an election awash in unprecedented amounts of money.

We appreciate that you recognize that the heart of such change must include the establishment of a citizen-led, small donor-driven campaign fundraising system. This paradigm, already in place in New York City and in several states, would encourage candidates to rely on everyday voters for their campaign funds, instead of spending extensive energy and precious time courting a handful of affluent campaign donors or turning to an army of professional influence-seekers and deep-pocket vested interests. It would broaden civic participation, invite citizens back into our democracy and strengthen the ties between officeholders and their constituents. Importantly, it would send a signal that New Yorkers could trust that their election officials were working for them.

Just as the prophets and saints from our faith traditions railed against economic wealth and power that resulted in injustice for the people, we follow in their footsteps and cry out against a system that tears at the fabric of our democracy.

Your leadership will not only benefit New Yorkers, but give great hope to all of us who treasure, and depend upon, a robust American democracy.
______________

The Rev. Dr. Katharine Henderson is President of Auburn Theological Seminary, and an international leader in theological education for excellence in religious leadership and progressive moral leadership in the public square.

For more on this campaign http://bit.ly/VklbXY