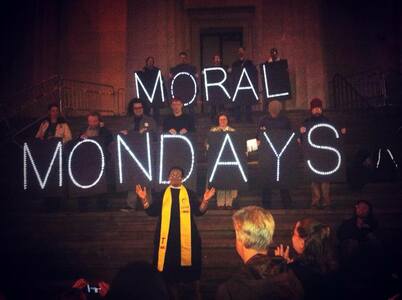 As diverse religious leaders, we call on you to stop balancing state budgets on the backs of the most vulnerable people in our state. Instead of offering the economically privileged further tax breaks, you should be requiring them to contribute their fair share, thus ensuring that New York be a just, compassionate, and welcoming state.

We demand that you not eliminate New York’s dedicated bank tax giving Wall St an additional $350 million of our states resources annually, but expand Wall St taxes. After foreclosing on millions of families’ futures, Wall St. banks gave over $90 billion in bonuses to executives last year. We should be requiring Wall St. to repay our communities.

We demand that you rescind your proposal to give $750 million of our state’s resources away to millionaires by reducing inheritance taxes. In the most unequal state in the country inheritance taxes which only impact the wealthy few should be increased not reduced.

Instead of offering the wealthiest homeowners in our state $1 billion of our state’s resources in your property tax "freeze" mechanism we demand that you make our property tax system more progressive not less.

We further demand that you allow New York City to raise taxes on millionaires to ensure a dedicated funding stream for its universal pre-kindergarten program.

Our faith traditions require us to reject your budget proposals as unjust social contract. His Holiness Pope Francis has recently characterized trickle-down economics as "a crude and naïve trust in the goodness of those wielding economic power."

We reject these tax breaks for the wealthiest among us that require teachers, healthcare workers, and librarians to live on less. We cannot accept a state that denies children the educational resources they need to succeed; that requires young people to go deeper into debt for college, and the elderly to live with less care. We cannot accept a state that denies the homeless and hungry in our state the services they need.

In the words of Walter Brueggeman “prophetic ministry does not consist of spectacular acts of social crusading or of abrasive measures of indignation. Prophetic ministry consists of offering an alternative perception of reality and in letting people see their own history in the light of God’s freedom and his will for justice.”

Our state policies must promote the inclusive society we are morally obligated to build together - one based on mutual respect and compassion; and one that upholds the golden rule to treat our neighbors as ourselves. We hope to meet with your office, as soon as possible, so that you can stand with us in the cause of justice, and reject any policy that results in harm to the many for the benefit of the few.