To: Members of New York State Wage Board 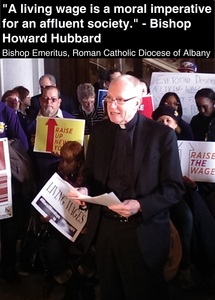 A few weeks ago, Governor Andrew Cuomo announced the appointment of a Wage Board, which could dramatically raise pay for hundreds of thousands of fast-food workers across New York state. Now the Wage Board is seeking input from New Yorkers, and as people of faith, we must speak out on behalf of low-wage workers and their families.

The announcement of the Wage Board is a huge deal. And let's not forget how we got here: For two and a half years, our underpaid brothers, sisters, and allies have organized with a moral mandate for $15/hour. Leaders like Jacquie, a McDonalds worker supporting a family in Albany, have courageously told their stories and called out low pay and poor working conditions. Their courage and commitment has made this moment possible.

The New York Times reported: "workers and labor organizers have made a compelling case for $15 an hour; Mr. Cuomo even cited their reasoning in calling for a Wage Board."

We have Gov. Cuomo's attention. Now let's keep up the momentum and make sure the new Wage Board hears us as it makes its decision.

The Wage Board will hear the economic argument from business leaders, and the legal perspective from lawyers. It's our job as people of faith to bring the moral fire – to demand that we honor the inherent worth of every person and the dignity of all work, to demand that we care for our neighbors, to demand that we protect the most vulnerable.

Sign and share the petition and we'll deliver it to the Wage Board to show that $15 IS THE MORAL AND JUST THING TO DO – and that people of faith and moral values all across New York State stand with our fast-food workers for $15.

We'll continue to gather signatures until June 22 and then submit them in person as testimony at the final public Wage Board hearing in Albany.