To: Governor Andrew Cuomo and the New York State Legislature 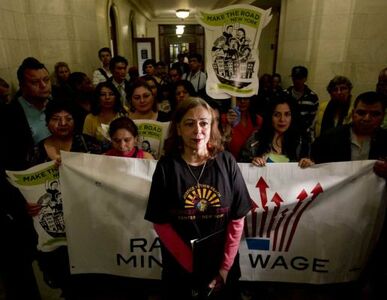 As New York State residents, we strongly urge you to act immediately and do everything in your power to raise New York State's minimum wage to at least $8.75 per hour, and index it to keep pace with inflation.

If you are a New York businessperson, please sign the Business for a Fair Minimum Wage statement instead: http://www.businessforafairminimumwage.org/New-York-Minimum-Wage-Statement-2013

At $7.25 per hour, New York’s minimum wage remains decades out of date.

With growing numbers of New York State residents relying on low-wage jobs to survive, too many workers do not earn enough to afford basic expenses.

Governor Cuomo proposed raising New York's minimum wage to $8.75 per hour during his State of the State address this year. Key leaders in the Assembly and Senate have promised action on raising the minimum wage during this session.

Now it's time for the legislature to deliver. New York’s lowest-paid workers cannot wait any longer.

The Senate and Assembly should pass legislation raising the minimum wage to $8.75 per hour and indexing it to rise automatically with the cost of living each year.

We will plan a creative action and deliver the petition in printed postcards in person in Albany.