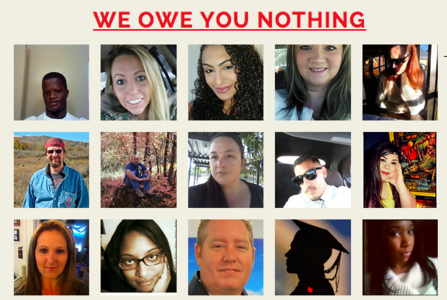 Erase all the outstanding obligations on student loans of current and former Corinthian students, and establish a fair debt cancellation process for all students as soon as practicable.

Corinthian Colleges Inc. isn’t a school, it's a fraud factory that buried vulnerable students, low income people of colour, veterans, and single mothers in unbearable debt. So why did the Department of Education bail them out while sinking students? Currently there are 107 (and counting) former Corinthian students demanding a full debt discharge not only for themselves but for the half a million other students Corinthian defrauded.

As people of faith, our tradition of jubilee reminds us never to accept an economy that isn’t working for the betterment of everyone within their society. The Biblical call to debt forgiveness is more than just an economic safeguard, it is a sacred teaching - a reminder of how human economies drift toward inequity and injustice, and must be routinely checked in the service of all God's children.

The fraud perpetrated by Corinthian Colleges Inc. not only represents clear abuses perpetrated against these particular students (which the Department of Education has the clear authority to relieve), it illustrates a much broader problem facing all student borrowers. An entire generation is sinking under the unreasonable burden of predatory lending practices, and the time has come for a fair debt cancellation process for all students.

Inspired by the student debt strikers? Donate to their Strike Fund to support future travel and organizing:
https://debtcollective.org/studentstrike#donate

Delivery plans will be announced shortly.

Student debt strikers seek help from the White House – Patricia Sabga catches up with two students who hope the government helps them in the battle against Corinthian College.

In June 2015, the Education Department announced that it would “forgive loans” taken out by 500,000 students of Corinthian, a sprawling network of for-profit colleges.

Do the new promises of relief from the Education Department hold up any better than the old promises made by Corinthian Colleges? So far, just a handful of students have seen their loans forgiven, despite a supposedly streamlined process. In fact, the Education Department appears to be placing barriers to access to loan forgiveness, like insurance companies discouraging unhealthy customers by situating their headquarters on the 8th floor of a building with no elevator.