In November, a Minnesota judge dismissed charges against organizers of a Black Lives Matter protest that drew thousands of demonstrators to the Mall of America – ruling it was peaceful and “not subversive”. 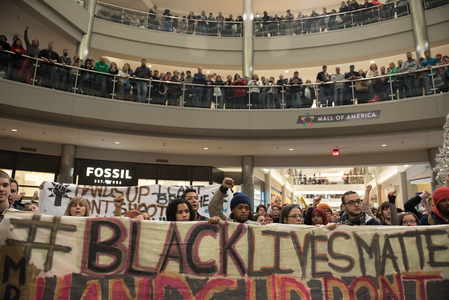 We demand that Bloomington City Attorney Sandra Johnson drop all criminal charges against the ‪#‎MOA36 - 36 organizers and bystanders of a peaceful protest at the Mall of America in December 2014 supporting the Black Lives Matter movement.

In December of 2014, over 3,000 people of all ages, races, and religious traditions gathered at the Mall of America to proclaim that Black Lives Matter; to proclaim an end to the "business as usual" economic policies which oppress and impoverish; and to proclaim that the terrorization of people of color through police violence and mass incarceration must stop. The gathering was a beautiful expression of non-violent protest and was filled with clergy, families, activists and artists who sang, preached, spoke-out and engaged in a powerful die-in.

As protesters laid their bodies on the floor in symbolic death and solidarity with Michael Brown, Eric Garner, Rekia Boyd, and the thousands more lost to police brutality, I stood with other clergy, encircling the peaceful protesters, and prayed. With hands lifted heavenward, I prayed that our economy (and the Mall of America which so powerfully represents it) would stop using the bodies of Brown and Black people to enrich the few. I prayed that the hundreds of police who surrounded us wearing bullet-proof vests, riot helmets and carrying weapons could see, especially in this season of the birth of the Christ child, the truth about the humanity and vulnerability of Black and Brown lives. I prayed that somehow I might continue to find the courage to put my white, woman’s, clergy body in the places that Jesus would have put his body—in solidarity where people are harmed.

But instead of receiving our multiracial, peaceful ritual as a witness for justice, the Mall of America and the City of Bloomington responded with police in military and riot gear, shutting down the Mall for a period of time. “What started as a demonstration of Dr. King’s vision of the 'beloved community,' became a reminder of what Dr. King warned could destroy our nation: the triple giants of racism, militarism, and extreme materialism,” said Professor Nekima Levy-Pounds, one of the protesters charged.

The Mall of America and the City of Bloomington augmented their militarized response by infiltrating meetings and surveilling social media to find the organizers of the protest and charge them with multiple offenses, including trespassing—an action that even former prosecutors have called a misuse of power. Instead of protecting the powerless from the powerful-- the mandate from our faith traditions and, indeed, the core ethical responsibility of our legal system--Bloomington City Attorney Sandra Johnson has used her great power to buttress the powerful against those who hold far less power.

On August 5th, in response to a defense motion, the most serious of the charges were dropped against the organizers. But there remain offenses which still require costly legal fees to fight. We demand that City Attorney Sandra Johnson drop ALL the charges against the #MOA36.

This die-in and the prayer that surrounded it were my Advent and Christmas practice. They were my way of marking the reality that God seeks to be born into real people’s lives and real people’s suffering. When Black and Brown lives still don’t matter enough to be paid a living wage, or kept out of the school to prison pipeline, or be spared a fatal bullet from a police officer’s gun, then people of faith of all races need to witness to the fact that Black Lives Matter—even in the rotunda of the Mall of America.

HOW IT WILL BE DELIVERED

To highlight the need for an end to business as usual and a new economic way of life that honors Black and Brown lives, we will personally deliver these signed petitions to City Attorney Sandra Johnson during the Labor Day commemoration.

Petition is successful with 3,204 signatures