To: Members of the U.S. Congress 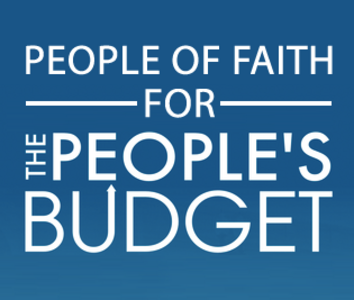 As clergy and faith leaders of many faiths, we urge you to support The People’s Budget, introduced by the co-chairs of the Congressional Progressive Caucus, Congressmen Keith Ellison and Raul Grijalva. The Federal budget should reflect our values and shared priorities, and we believe that this proposal achieves that goal.

The teachings of our respective faiths are steeped in the understanding that we have a communal responsibility to care for the most vulnerable in society. Feeding the hungry, clothing the naked, ensuring that all workers receive a fair wage are not simply policy positions: they are sacred obligations.

The People’s Budget would create desperately-needed, good paying jobs, repeal sequester and all Budget Control Act spending caps and end Corporate Inversions that allow U.S. companies to avoid paying taxes. The Budget’s proposals invest in veterans, women, communities of color and their families and K-12 education. It expands the Earned Income Tax Credit and unemployment insurance and enhances the social safety net. It reauthorizes the Children’s Health Insurance Program (CHIP) and implements comprehensive immigration reform, including a pathway to citizenship. In short, The People’s Budget, if passed, would set our nation back on the path toward a fair and healthy economy.

These priorities were among those laid out by the Washington DC Interfaith community in releasing our own Faithful Budget, which lays out how government spending could align with these moral priorities:
http://bit.ly/faithful-budget

Our government should serve all of its citizens. By bolstering the social safety net for those who most need it and prioritizing measures that reduce the growing inequality in our nation, The People’s Budget does just that, and it deserves the support of Congress. We urge you to vote for it when it comes to the House Floor.

The People's Budget was introduced this week. The petition will be shared with Members of Congress as they consider their votes next week.