After negotiations between Corizon Heathcare and the United Steelworkers Union, Sister Barbara Finch was rehired! 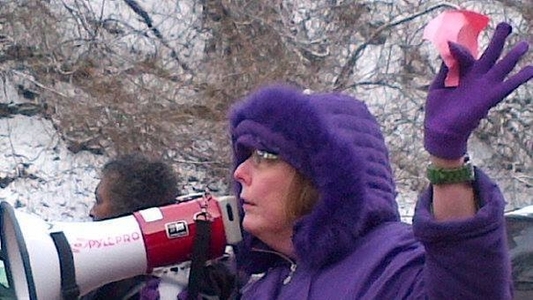 As people of faith, we were deeply saddened by your blatant retaliation against Sr. Barbara Finch for her efforts to seek union representation.

The U.S. Council of Catholic Bishops points out, "No one may deny the right to organize without attacking human dignity itself. Therefore we firmly oppose organized efforts, such as those regrettably seen in this country, to break existing unions or prevent workers from organizing."

Therefore we urge you to honor the human dignity of Sr. Barbara Finch and her coworkers and quickly reinstate her and stop retaliating against workers seeking to organize for a collective voice at your facility.

Sr. Barbara Finch is a five-year veteran nurse at the Allegheny County Jail infirmary. She was fired last week for leading efforts to organize her coworkers to form a union.

Workers at the jail are working to improve conditions to better provide patient care and safety. They want a voice in their workplace so that they can carry on the mission of providing healthcare with dignity.

All workers deserve the right to stick together for a united voice, better working conditions and safer workspaces. Sr. Barbara should not be fired for leading efforts for a more fair workplace!

Petition is successful with 18 signatures

Petition is successful with 16 signatures

Petition is successful with 15 signatures